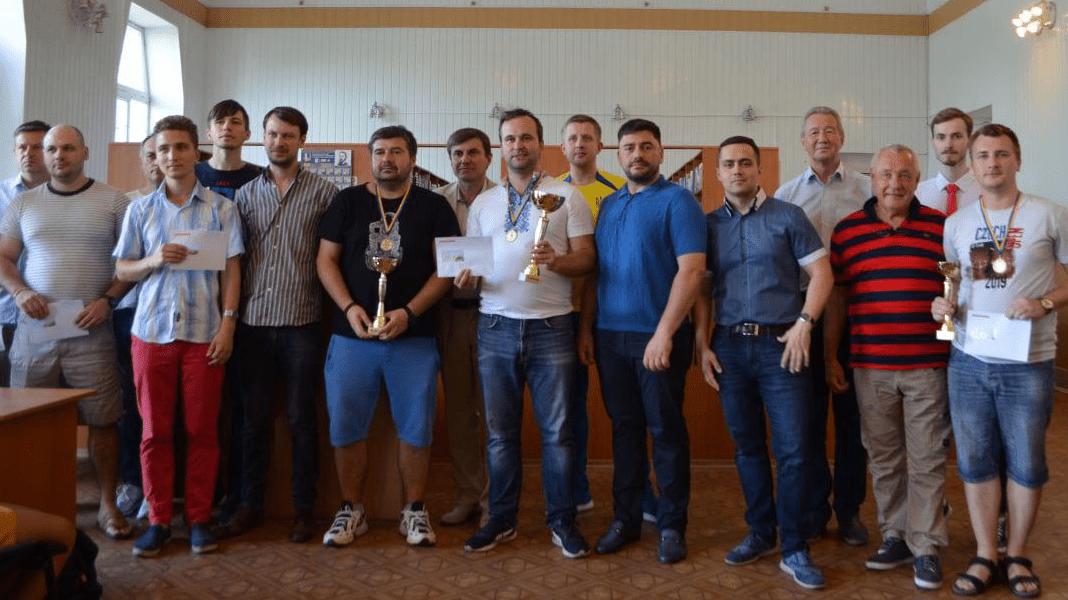 Prize winners at the Cup of Independence. Photo provided by Olexandr Prohorov.

On August 27-28, during the Independence Day weekend, the first big chess tournament since the start of the war was held in Kyiv, Ukraine. A 30-year-long chess tradition was continued in the Ukrainian capital, where the war has moved away, but never feels far away.

Like many Eastern European countries, Ukraine has a strong chess tradition which not only translates into the presence of many famous players but also in an active tournament circuit. Before the war started on February 24, now six and a half months ago, Kyiv's chess scene would be quite active. You could always find players in Shevchenko Park, and there would typically be a rapid or blitz tournament at least once a month with the participation of IMs and GMs, as well as regular tournaments for kids.

As the war disrupted normal life in terrible ways, chess has obviously been affected as well. Tournaments have been scarce, and so it was good to see the 30-year tradition of the Independence Day tournament continue, also in this tragic year for the country, thanks to different sponsors including the local government.

First held in 1992, the "Cup of Independence" is also a memorial for Sergiy Shystariov, an influential trainer and organizer who passed away three years ago. Shystariov played an important role in organizing the tournament from the very start, and some of his pupils later became sponsors of the event.

For many years, classical chess was played at the event but during the corona years 2020 and 2021, this was changed to a weekend of rapid and blitz, for practical reasons. It makes it easier for local players to attend. Due to the war situation, it was decided to continue with this faster format also for the 31st edition.

With a prize fund of about $2,200, this Sergiy Shystariov Memorial was the biggest tournament held in Ukraine since the start of the war. Over the course of three days, 176 participants competed for decent cash prizes, with the first six boards being broadcast on the Internet.

A total of six GMs and six IMs competed in a field of 83 players, representing 10 of the 27 regions of the country. Besides Ukraine, three more federations were represented: Belgium, for which local GM and co-organizer Vadim Malakhatko plays, and also the Czech Republic and Germany, each with one player who had family ties with Ukraine.

On Friday, August 26, two days after Ukraine's Independence Day marked six months of war, a nine-round blitz tournament (3+2 games) was held. IM Valeriy Grinev edged out five other players on tiebreak, including Malakhatko, after all had finished on 7/9.

The rapid tournament, which saw six rounds on Saturday the 27th and three rounds on Sunday the 28th (15+10 games), had even more players: 96 in total. Also here, Grinev won on tiebreak, scoring 7/9 once again, together with six more players.

Although it was possible to hold a big and strong tournament again, it doesn't mean that the war is over for the people in Kyiv. The battlefield is now concentrated in the eastern part of the country, where Russia now occupies one-fifth of the country (the size of Hungary and the Czech Republic combined!), but there is always a chance for the return of air raids or hypersonic rockets.

"We still have air raid sirens regularly," Olexandr Prohorov, a co-organizer of the tournament, told Chess.com. Prohorov made sure that a bomb shelter was available for the participants, about a hundred meters away from the playing hall. "Luckily, the sirens didn't go off during the tournament."

In March, just a few hundred meters away from the building, a trolley bus was hit by a rocket. Nowadays, when sirens go off, public transport is temporarily unavailable.

One of the participants of the Cup of Independence was IM Viktor Skliarov, a 29-year-old physics and mathematics teacher and official Chess.com streamer. Not having missed a single year since 2009, he was in fact one of the players who tied for first place in the rapid tournament this year, finishing third on tiebreak.

Ever since the war broke out, Skliarov has been dedicating all the profits of his streams to charities related to the war. For instance, he has supported the battalion of GM Igor Kovalenko, who is one of the few grandmasters who decided to join the army. Streaming two or three times a week (e.g. Titled Tuesday, Arena Kings, Chess.com Rapid Chess Championship), Skliarov has already collected and donated close to $1,000 since February 24.

A self-portrait of Kovalenko, posted on his Twitter earlier this summer.

"My job as a teacher takes most of my time, but I am trying to spend as much spare time as possible streaming and supporting the charities," said Skliarov, whose brother Alexander (26) helped with translating during the Zoom call.

"There is no truly safe place at all in Ukraine," Alexander said when asked if Kyiv is relatively safe these days. "Any city can always get under attack again, but at least we do not have constant artillery fire as in Kharkiv or Mykolaiv, closer to the front regions."

Ukraine's capital looks much more like any European city these days, according to Alexander, although you won't find very crowded areas anymore. Kids have returned to school, and students to universities. A curfew is still upheld: between 11 p.m. and 5 a.m., you cannot be on the street without permission.

Although the frontline has moved hundreds of kilometers away from the capital, the war is always on everyone's mind. "Even though we live in Kyiv, we feel a burden inside us. We can't join, we can't help properly as we want to. We have mixed feelings because at the same time, it's relatively safe," Alexander added.

The two siblings live together in Kyiv, while their parents and grandparents actually live in Kherson. It is a city located in the occupied territories, where the war situation is much more dangerous at the moment. "We are quite nervous about the situation," said Alexander. "Sometimes we don't have any contact with them for five days and we don't know if they are OK. Right now, they have problems with water and electricity, due to the shelling of one of the nuclear power plants. It's hard to concentrate on our daily job and not to think about them all the time."

What does the future hold? While nobody can really predict how this war will continue, Viktor says he hopes that the "temporarily occupied territories" can be won back before the end of the year, before winter starts. "And we hope we can gather more supplies from our allies, especially the U.S., the E.U., and the U.K. We are defending our land, but it will be hard to win back the 20 percent that is now occupied."

Meanwhile, chess will continue, whatever happens. Malakhatko and Prohorov are working on a new, big rapid tournament called the Anfield Cup, to be held September 24-25 for strong, local players (invite only). It will likely have a decent prize fund, helped by the fact that the organizers met a potential extra sponsor during the Cup of Independence.

"We're staying strong here," said Alexander. "It is a good time to participate in over-the-board tournaments and see friends whom we haven't seen for six months."