Ding Liren is a Chinese super grandmaster who many people consider to be a primary contender for the world title. Ding won his first Chinese Chess Championship at the age of 16, making him the youngest to ever do so. In the 2017 and 2019 Chess World Cup, he became the first player in history to reach the finals twice in a row. The latter result means that Ding would play in the 2020 Candidates Tournament, which decided who gets a shot at the world title.

From August 2017 to November 2018, Ding held a 100-game unbeaten streak in top-level chess competition—the longest in history until GM Magnus Carlsen broke it in October 2019. In 2018, Ding entered the world’s top-five chess players (May) and broke the 2800-rating mark (September), and he remains in those categories today.

One of Ding’s crowning achievements so far is his peak rating, one of the highest in history. His 2816 in November 2018 matches Veselin Topalov and Hikaru Nakamura for the tenth-best rating of all time.

Ding was born in Wenzhou, a city in the southeastern Zhejiang province of China. The city has a rich chess history—it’s also where former Women’s World Chess Champion Zhu Chen is from. When Ding was four years old, his mother took him to a chess club in Wenzhou. He studied chess there and had the same starting coaches that Zhu had, including his first coach, Chen Lixing, who’s famous in the Wenzhou Chess Association.

Ding was successful in early competitions. As a teenager, he regularly participated in and won a strong tournament for his age groups in the Li Chengzhi Cup. He also competed on a world stage. In November 2003 and November 2004, he tied for first at the U-10 World Youth Championship and U-12 World Youth Championship, respectively. Ding finished second on tiebreaks in both events. Ding had his breakout year in 2009. At only 16 years of age, the Chinese phenom proved that he was a world-class chess player. It all happened in one event—the 2009 Chinese Chess Championship.

The field consisted of 12 players. Ten were grandmasters, and the three at the top of the field—Ni Hua (2724), Bu Xiagzhi (2704) and Wang Hao (2696)—were near or above the 2700-rating threshold. Ding was one of two in the field without a grandmaster title, and he had the second-lowest rating (2458) of all participants.

Ding had a miraculous tournament. He went undefeated, scoring 8.5/11 and beating two of the highest-rated players in the event, Wang and Ni. Ding’s tournament performance rating was a staggering 2811. That win meant that Ding, at 16 years old, was the youngest to ever win the Chinese national championship. His performance at the tournament also gave Ding the final grandmaster norm needed for the prominent chess title. In one event, Ding became a national champion and a grandmaster. He officially received the title in October 2009, two weeks before his 17th birthday.

During this period, Ding was also involved in international play for China. He started in the 2012 Chess Olympiads on board three, when his team placed fourth. In 2014, China won gold and Ding won individual bronze for his performance on board two. The team didn’t place in 2016. (At the 2015 World Team Championships, China won gold and Ding took individual silver for his performance on board one.) 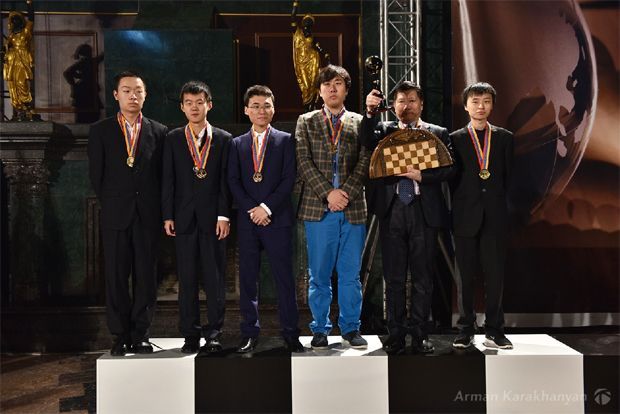 Other highlights include Ding placing third at the 2012 World Junior Championships and his accomplishments in 2015. In the 2015 Tata Steel tournament, he scored 8.5/13, placing (shared) second behind Carlsen. He was joined in the runner-up spot by Maxime Vachier-Lagrave, Anish Giri, and Wesley So in the star-studded event. (He once again placed in shared second place in 2016 Tata Steel behind Carlsen and this time alongside Fabiano Caruana.) Later in 2015, he became the second Chinese player after Wang Yue to enter the world’s top-10 best players.

Early in 2017 Ding won the Shenzhen Longgang Chess Masters in Shenzhen, China. He finished 6.5/10 points and one point ahead of both Giri and Peter Svidler, who shared second place. Then in May, Ding won the Moscow Grand Prix over Shakhriyar Mamedyarov and a field including nine players rated at least 2750.

Most notable was Ding’s performance in the 2017 FIDE World Cup. The 11th-ranked Chinese player had a strong tournament, reaching the finals of the 128-player tournament after taking down second-ranked So in the semifinals. Ding faced Levon Aronian in the finals, and after four draws in the classical portion of the match, Aronian edged Ding in rapid tiebreaks 2-0.

The next month, in March, Ding finished in clear second place behind Carlsen in 2018 Shamkir Chess. In October Ding returned to team competition at the 2018 Chess Olympiads. China won gold, and Ding won individual gold for his performance on board one with a performance rating of 2873, the second-highest showing for any player in the event. 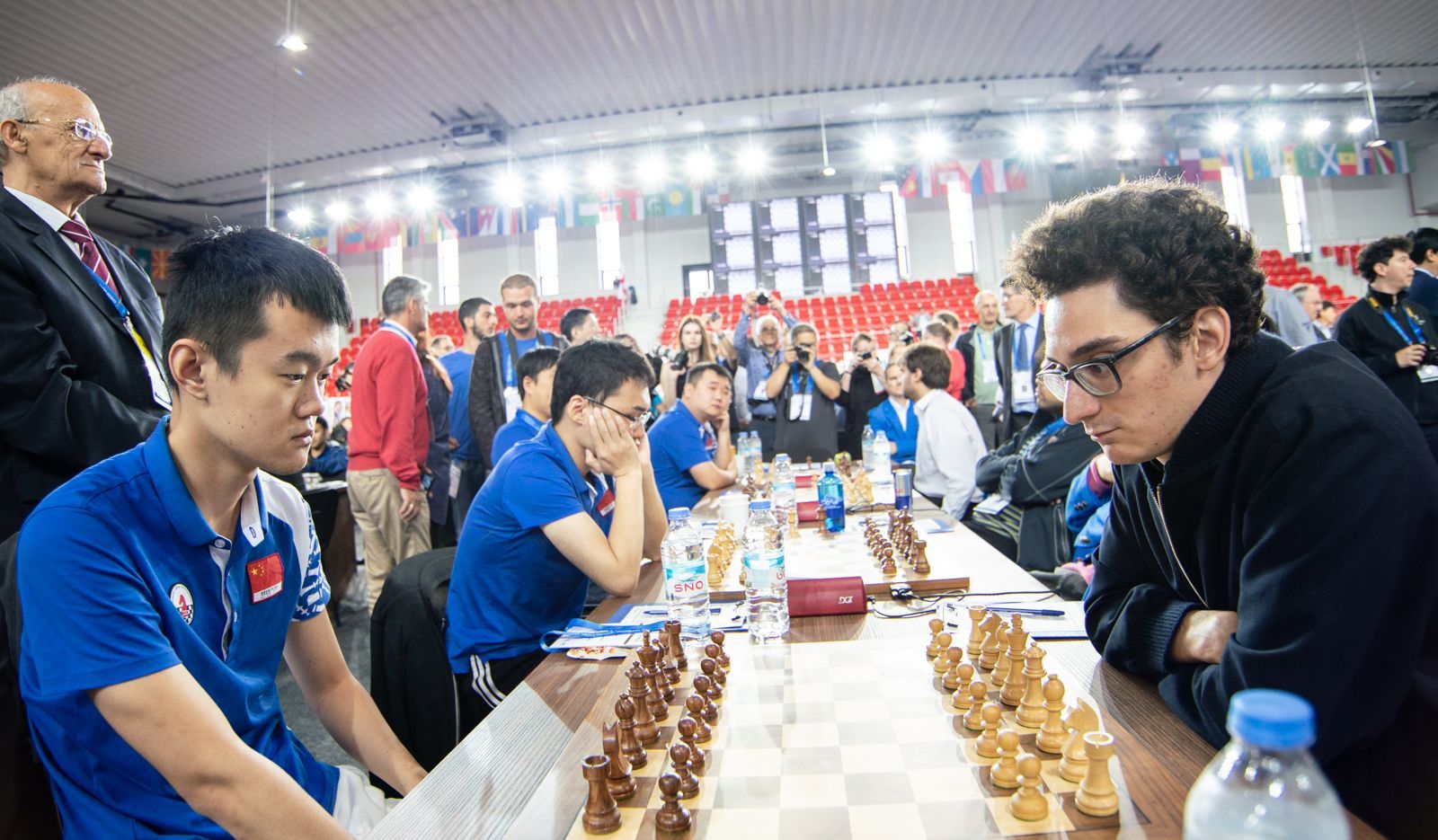 In 2019 Ding had one of his most impressive tournaments at the 2019 Sinquefield Cup. In a field that featured 12 top-level players—the lowest-rated player and only one under 2750 was Nakamura—Ding went undefeated with 6.5/11 points and a tournament performance rating of 2845. He tied with Carlsen for first place, and the two played a blitz playoff match with Ding winning both games. Ding was the first player to beat Carlsen in tiebreak games since Aronian did it in 2007.

Just a couple of months later, Ding played in the 2019 FIDE Chess World Cup. Like his 2017 performance, he again made it to the finals. Ding, the top-seeded player in the 128-player tournament, faced Teimour Radjabov, and the match went to tiebreaks. Radjabov won both blitz tiebreak games, and both players qualified for the 2020 Candidates Tournament.

Ask chess fans and experts who has the best shot of becoming the next world champion, and it won’t be long before you hear Ding’s name. He’s demonstrated that he has what it takes to beat Carlsen in top-level tournaments. When you consider accomplishments like three Chinese Chess Championship titles, a 100-game unbeaten streak, and top-five status in classical and blitz chess, it’s easy to agree with what a lot of people are saying.

Ding was one of the favorites heading into the 2020 Candidates Tournament, but he had a bad start after losing his first two games. On March 26, 2020, the Candidates Tournament was postponed due to Russia's travel restrictions and the COVID-19 pandemic. After seven rounds, Ding was tied for seventh-eighth place with 2.5/7.

After the tournament resumed on April 19, 2021, Ding performed much better than in the first half. Winning the last three rounds against GMs Alexander Grischuk, Kirill Alekseenko, and the tournament winner Ian Nepomniachtchi, the Chinese super grandmaster rose to fifth place with a score of 7/14. 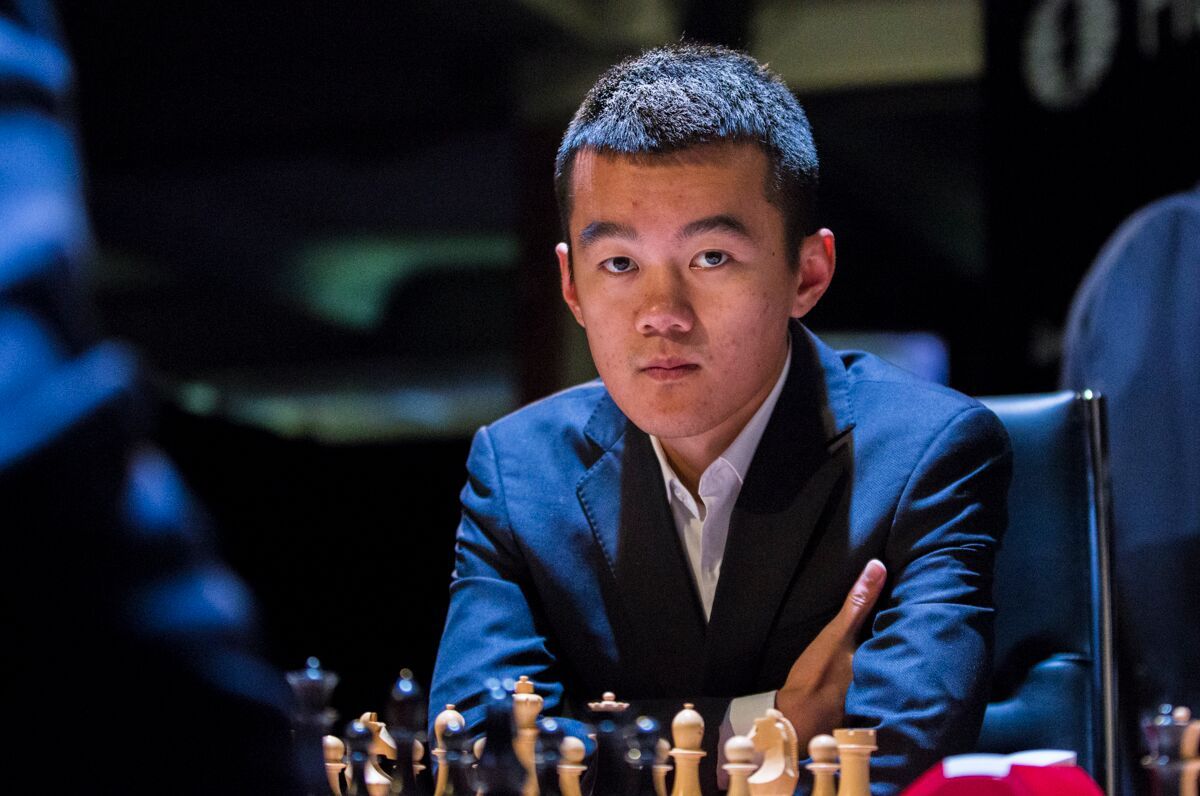 In 2022, Ding qualified for the Candidates by rating. Once again, he had a solid performance after a shaky first half of the tournament, winning against GMs Jan-Krzysztof Duda, Richard Rapport, Caruana, and Nakamura to secure second place. As the runner-up of the Candidates, Ding qualified to play in the 2023 World Chess Championship following Carlsen's abdication of the throne.