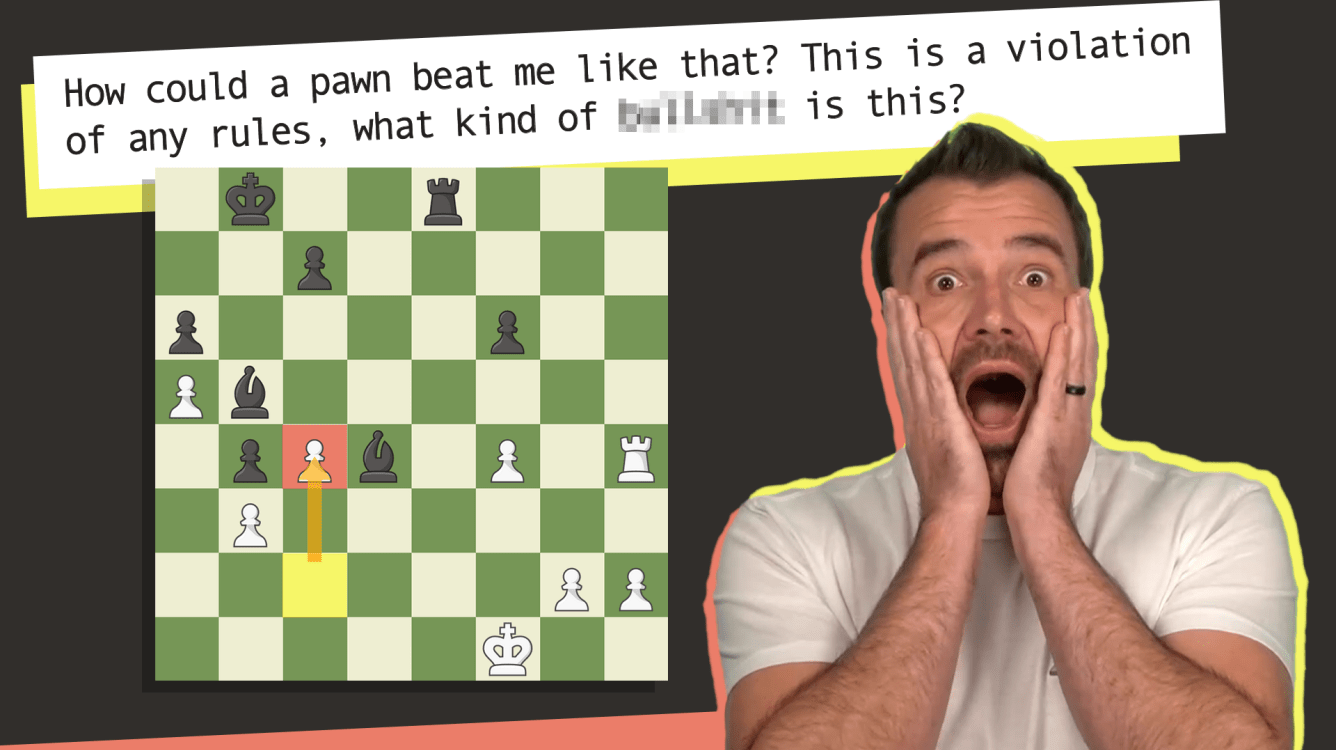 Okay not quite, but it is true that the hard part is playing well, not learning how to play. At least, in most cases. Some rules in chess are easy to get wrong—or not at all. In this article we explore them.

The dreaded en passant allows pawns to capture enemy pawns at their side, instead of diagonally in front, for one move. This rule became so misunderstood that it eventually received enough exposure to the point that everybody gets it now, right? We even put up a little icon when the move happens in a game! 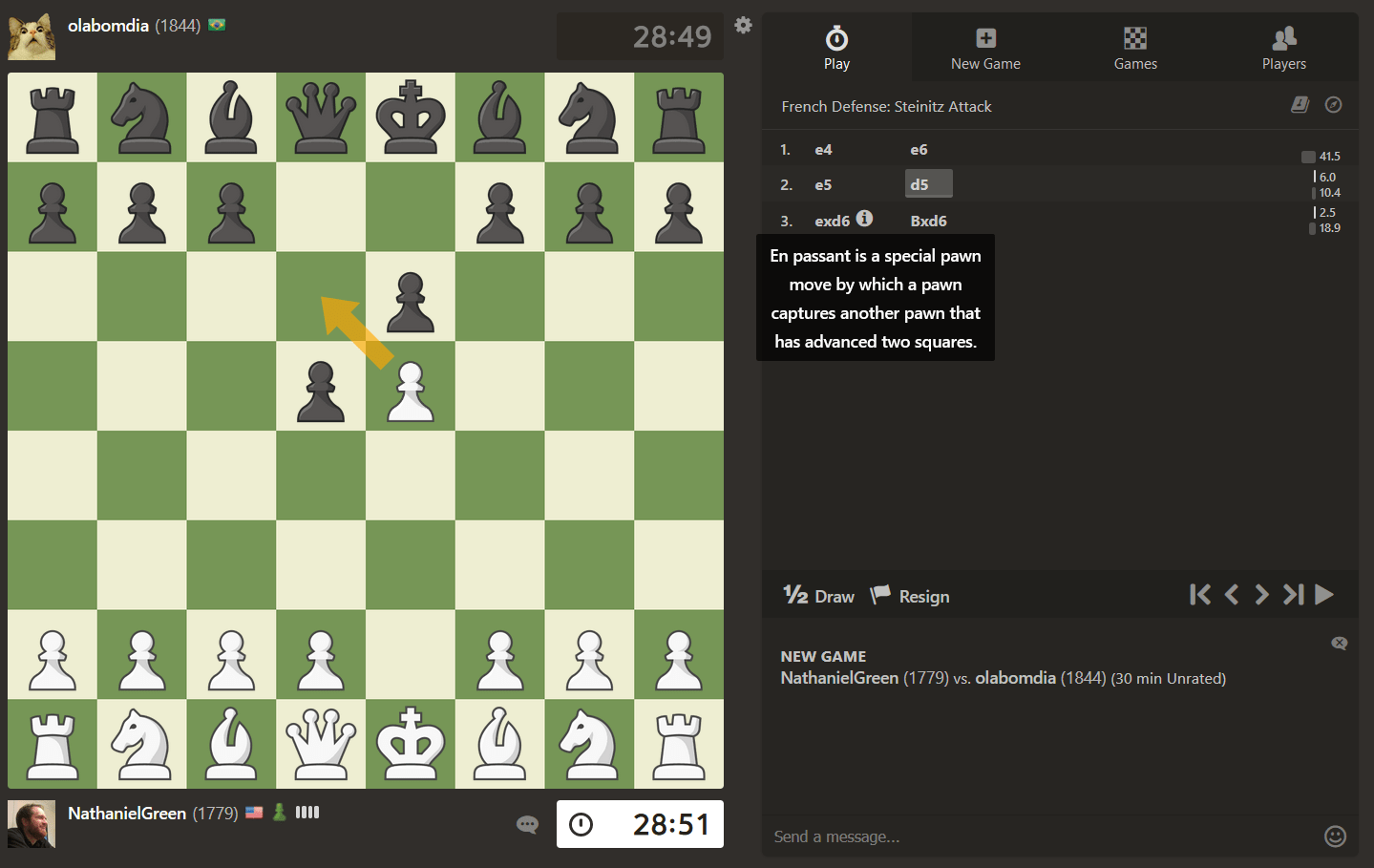 Alas, no. Our support team still gets comments and probably always will. Just in the last few weeks:

"I love playing chess against the computer, but lately I've noticed that they are cheating. They make moves that they shouldn't be able to. For example, I moved my pawn to beside their pawn, my pawn then disappeared and their pawn was in the square below where I had moved to???"

"I got pissed when a certain player made an illegal move which resulted in him winning. Pls ensure players abide by the rule of pawn."

I can assure you that our computer personalities follow all the rules of chess—even the rule of pawn.

We'll get it eventually, folks! Next time your friend insists that en passant is actually not allowed, have them read this support article and this how-to article to learn more.

Castling: What If My Rook Is Attacked?

Ah yes, castling. It's the only time two pieces move on the same turn, but that's all there is to it, right? Well, no.

Is Castling Legal: The Table Guide

There are two infamous stories of top Soviet grandmasters, GM Yuri Averbakh and then GM Viktor Korchnoi, not knowing whether castling is legal when the rook is attacked. GM Greg Serper tells both tales in this article.

Now, what if I told you that grandmasters—world champions even!—sometimes screw up the first rule? Yes, the one about castling in check.

Not in standard chess, fortunately: It actually happened quite recently at the Fischer Random World Championship. Fischer Random, also known as Chess960, changes nothing except the starting position of the pieces, but this also leads to issues with castling. FIDE determined a while ago that castling in Chess960 involves putting the king and rook on their normal castling squares (c1 and d1 queenside or g1 and f1 kingside for White) with all other standard rules applying.

What the world champions of both standard chess, GM Magnus Carlsen, and of Fischer Random, GM Wesley So (2019), didn't realize is that, even if the king is on c1 or g1, it nonetheless technically "moves" during castling! And for that reason, you still can't castle when in check.

Stalemate: Who Wins? Nobody?

Okay, never mind Duck Chess; it's too much of a mind-bend.

Assuming you're playing standard chess in the 2020s, stalemate is a draw. Sorry, not sorry to those who think it should be a win for the side giving stalemate, even though the other side's king isn't even under threat of capture.

Promotion: Can I Make A King?

In some places, you used to be able to promote to only a piece that had been captured. Two queens, let alone nine, was a no-no. Lasker Trap? Forget about it.

In other places, you could promote to only the specific piece that started on that file. So only the d-pawn could become a queen, the a-pawn would become a rook, etc. This got very confusing for the e-pawn. Some people still wonder if you can promote to a king, but no, you cannot.

These days, while a novice may still have understandable questions, promotion is a fairly simple rule as chess rules go: Pawn gets to the end and it becomes a queen, rook, bishop, or knight. The end.

Check And Checkmate: Can I Capture The King?

Fortunately, Chess.com won't let you make illegal moves like ...Kxb5 or Ng5+, but they may happen in over-the-board or casual offline games. Next time, you'll know.

Draw By Repetition: How Many Parameters?

It sounds like a simple rule: If a position repeats three times, the game ends in a draw. But do you know the answer to these questions:

The answer to all four questions is... No!

And while that's a lot to keep track of, these draws on Chess.com are automated. There is no need to panic with 1.4 seconds on your clock, trying to remember if that knight was last on d7 or f6 and whose move it was at the time. When you're playing an in-person event, however, you're on your own!

As with castling, even top professionals have messed this one up, most notably GMs Bobby Fischer and Boris Spassky in the 20th game of their 1972 match. Fischer claimed a draw by repetition, even though it turned out to be Black's move the first two times the position appeared and White's move the third time.

Even if Spassky knew that Fischer's claim is incorrect, you can forgive him for being ready to go home. Fischer won the match in their very next game.

Conclusion: Is It Over?

Yes, it is, or at least the article (not your chess playing!) is, provided you understand all these rules! If not, well, there's time to learn and plenty of resources that can help.

To learn more, try reading our Chess Terms and the official FIDE rulebook, or even just playing and learning as you go!